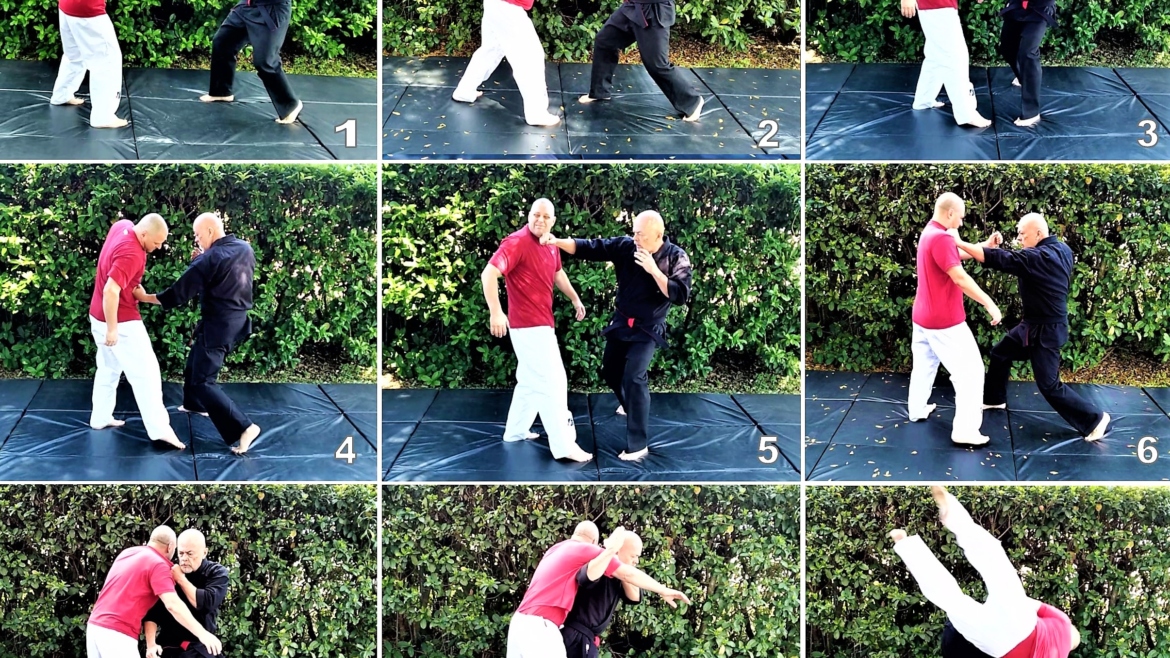 Kajukenbo is a very well rounded fighting system with a lot to give its practitioners. If Boxing is the sweet science Kajukenbo is quite literally the science of motion. Kajukenbo is a amalgamation of (KA) Karate, (JU) Judo, (KEN) Kenpo, and (BO) Boxing.  It’s diversity fully utilizes motion on many different planes. In training strive to develop a logical plan when working combinations. Techniques in Kajukenbo when thrown in combinations should make “sense” they have to be effective, efficient and logical. They should apply mathematical thinking, the working of angles, sound body mechanics, footwork, the logic of movement as well as eliminate unnecessary movements. The same applies when you want to insert throws and takedowns into your combinations.

Footwork at its most basic level, is the means in which you get to the target or evade an attack. Footwork is literally the basis for all technique be it armed or unarmed. The quality of your technique depends on what is happening with the feet. Every strike, every evasive move, starts from the ground up. Tactically, footwork is the basis for everything: how you set up your opponent, regulate distance, close the distance and attack.

A lot of our drills are based of the premise that nobody just throws one punch at you. They throw multiple punches or they grab with one hand and punch you repeatedly with the other. My old instructor had a saying if you can defend against “punches in bunches”, then a single punch shouldn’t be a problem.

1.) From a fighting position your opponent throws a round house punch. 2.) Step forward with the right foot and with drawing your hands back, strike his punching arm with a left outward thrusting block and an inward thrusting block. 3.) The opponent follows up with a left round house type punch, shuffle in with the right foot forward and strike the opponents incoming arm with the boney area of the outside of your right forearm. Your left hand rechambers and comes up along the right side of your face.

4.) Push of the left foot and step forward with the right shuffling toward twelve o’clock and strike the side of your opponent’s neck with a left outward sword hand.  5.) Immediately execute a right punch as your feet shift position. Your right foot shuffles back and pivots counter-clockwise as the left foot moves forward toward the direction of the ten o’clock position.  Follow through with the punch by turning your hand over.  6.) Push off the left foot and step forward with the right foot (toes should be pointing toward the twelve o’clock position). Strike your opponent’s right shoulder with a left heel of palm strike and grab his clothing at the area struck. This strike should be hard enough to disrupt his posture and rock him back on his heels. (Note: The heel of palm strike targeting the pocket of the shoulder disrupts the opponent’s posture and rocks him back onto his heels. Notice the opponent is rocked back on the heel of his left foot and his lead foot is off the ground.)

7.) With a short quick jerk with the left hand, pull the opponent into you. This should rock him to his front and off of his heels. Simultaneously step your right foot straight to the inside of his right foot.  8.) Pivot on your right foot counter – clockwise and bring your left foot back between your opponent’s feet. Simultaneously pull the opponent forward and bring your right arm up under his right arm. Pinch his right bicep between your right bicep and forearm.(Note: The toes of both of your feet should be in line with the toes of his right foot. Your knees should be bent and your axis forward. Your belt line should be a few inches lower than your opponent’s beltline. Your opponent should be up on his toes, his balance broken forward.)

9.) Straighten your legs and bend at the waist popping your hips up and lifting him into the air (this is an explosive movement). Keeping your grip on the opponent, bring your left elbow downward, twisting your upper body toward your left hip to finish the throw.

DIAGRAM OF FOOTWORK FOR THE THROW (Step and Pivot Entry)

1.) Standing at the top of the triangle bending at the knees to get your center of gravity low.

3.) Pivot counter – clockwise on the right foot bending at the knees and bring the left foot back to the base line of the triangle to the inside of your opponent’s left foot.

FOR MORE ON KAJUKENBO AND TECHNIQUES 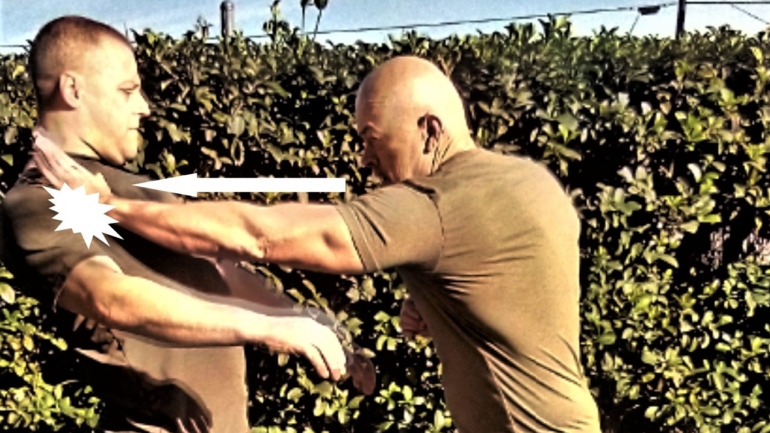