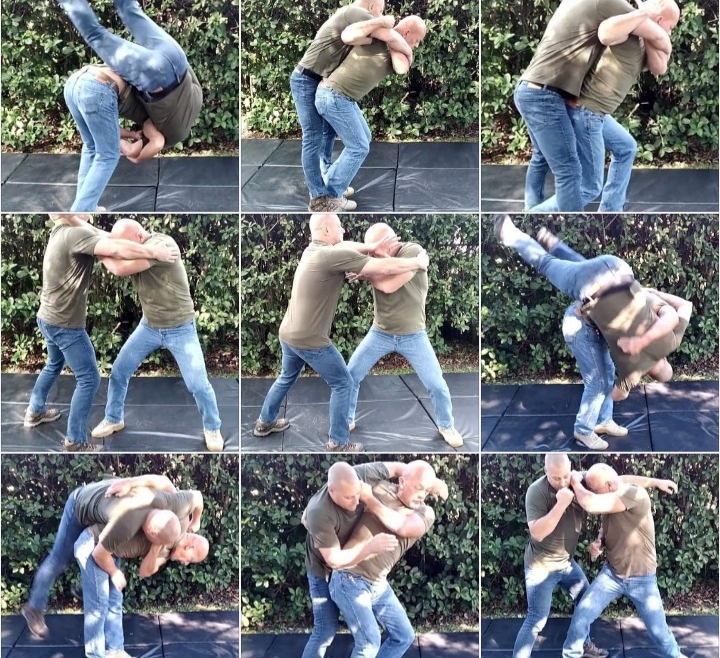 COMBAT JUDO was originally developed to address the needs of military personnel, facing new hand-to-hand combat challenges, as a way to ensure a streamlined, tested, and effective method of self-defense. Combat judo’s roots stem from WWI. A combination of judo and boxing, this fighting method was found to be extremely effective in trench warfare during the latter half of WWI. It wasn’t until WWII that it was referred to as “Combat Judo” this was done to distinguish it from traditional martial arts systems.

In 1945 SSG Robert Carlin, USMC, self published his book entitled Combat Judo for both military and civilian use. In his book he states that combat Judo is a more advanced method of fighting. He even goes further into the details of its training by likening it to the training in boxing. As an example, even novice boxers put in hours and hours and round after round in training just the fundamentals alone.

Looking at the fact that Carlin had been a golden gloves boxer and a judoka and the fact that Combat Judo was rooted in both boxing and judo his comparing it to boxing training makes perfect sense. In this light Carlin’s comparison speaks volumes of the importance he emphasizes in his book on how Combat Judo is to be trained. Simply learning “tricks” as Carlin puts was not enough, one needs to learn the fundamentals. Carlin goes so far as saying people who only learn “tricks” often find themselves in situations they cant “solve” or deal with in fighting. Carlin points out that the reason they fail is they didn’t take time to train in the fundamentals of a system to the advanced level.
Getting to a more advanced level requires training, working your fundamentals in combination with one another dealing with various situations one might encounter in fighting. Simply put boxers work on their combinations, counter punching and footwork for proximity management through various training drills and sparring.

RIGHT VS RIGHT SITUATION VS A LEAD JAB

1.) Both you and your opponent are fighting out of a right side forward stance.

2.) The opponent throws a right lead jab to the head. Pull back from the opponent by shifting your body weight to the rear leg and leaning your upper body backward to avoid the jab.  You want to pull back just enough to make him miss.

3.) Immediately follow his jab with a straight left punch to the opponent’s head. Both feet should pivot clockwise with your toes pointing toward the twelve o’clock position as you throw the left punch. Your chin should be tucked behind your left shoulder and your right hand is up to protect the right side of your head.

4.) Pivot counter – clockwise on both feet (toes of both feet should end up pointing toward the nine o’clock position) and a right corkscrew punch over the top of his left guard to the side of his jaw.

5.) Pivot clockwise on both feet (toes should be pointing toward the twelve o’clock position) and strike your opponent’s right shoulder with a left heel of palm strike and grab his clothing at the area struck. The shoulder strike should rock him back on his heels.

6.) With a short quick jerk, keeping your elbow up, pull him into you. Rake across his ribs and sternum with a right horizontal elbow strike as you step your right foot to the inside of his right foot.

8.) Straighten your legs and bend at the waist popping your hips up lifting him into the air (this is an explosive movement).

9.) Keeping your grip on the opponent, bring your left elbow downward, twisting your upper body toward your left hip to finish the throw.

Note: You should not feel like you are muscling your opponent onto your hips. If you feel like you are picking him up with your arms to get him over this generally means: 1.) your entry is too high; your knees aren’t bent enough and your hips are not lower than your opponent’s hips. A good rule of thumb is to ensure that your belt line is a few inches lower than his belt line.  2.) You aren’t stepping in deep enough. 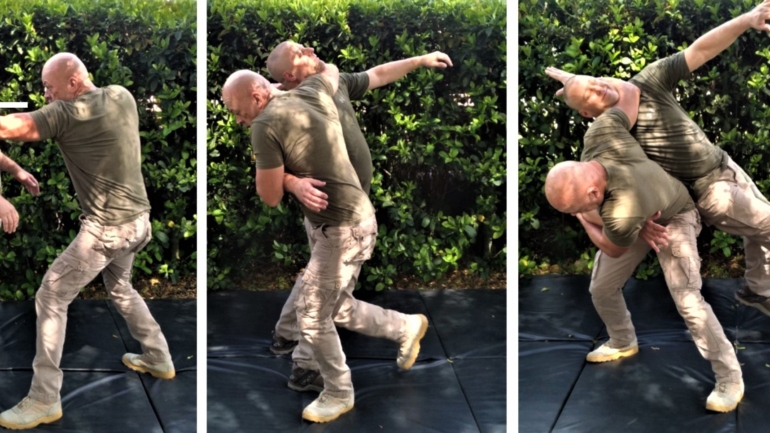