“Kajukenbo is the first of its kind of all origins in mixed martial arts.  Prior to its known existence in 1947, the history of Kajukenbo began when the USA was in war with Japan.  Before it became worldly known as Kajukenbo in the 1960’s, we called it Kenpo Karate.”  – MSgt. Tony Lasit, U.S. Air Force, Ret., Veteran of WWII, Korea, Vietnam and Founder of the U.S. Kajukenbo Association.

Much like the U.S. Armed Forces military servicemen that trained in Combat Judo during WWI and WWII, Kajukenbo was designed to disarm, disable and destroy an opponent with fierce proficiency. From its beginnings, Kajukenbo was an eclectic and adaptive self-defense oriented fighting method. Its sole purpose…..SELF DEFENSE.

The dynamics of this hybrid self-defense system speaks for itself. Kajukenbo is known for its in – close rapid fire striking. One of its concepts, double tapping, is striking with the same hand 2 or more times consecutively while generating the same power as you would if you were throwing alternating punches in combination. Boxers will double and triple up on their jabs. Professional boxer Roy Jones Jr. was famous for throwing multiple hooks with the same hand with blistering speed and power.

Another example of double tapping is blocking or parrying and then striking with the same hand. This requires sound body mechanics, footwork, positioning of the body; everything working on different planes of motion in unison generating torque in the execution of each technique.

1.) From a fighting position your opponent throws a round house punch. 2.) Shuffle in and in a thrusting motion strike the opponents incoming arm with the boney area of the outside of your right forearm. 3.) Without rechambering or drawing your right arm back Immediately follow up with a straight punch.

Boxing utilizes an athletic performance model that weighs heavily on mindful repetition of 4 punches used in different combinations in conjunction with footwork and proximity management. One of the things we always do is put punching, kicking and throwing techniques together in workable combinations and Drill them. These combinations range from simple to complex. Various footwork methods are also used when entering in for the throws. In the following combination drill we work a step and pivot method into a throw, Ippon Seoi Nage. In other drills we incorporate a split step entry and a back step entry. The split step and back step entries allow one to execute throws from different angles.

The purpose of the following drill is to instill proper body mechanics, positioning, body rotation, footwork, balance maintenance (yours), off-balancing the opponent, as well as speed and quickness transitioning from strikes into a throw.

It is recommended that you concentrate on the transitions from one strike to the next steps 1-6 After getting proficient with body mechanics and footwork in steps 1-6 then add steps 7-9.

1.) From a right foot forward fighting position push off the rear foot and shuffle in stepping your right foot forward toward the twelve o’clock position as your left foot moves up.  2.) The feet turn counter clockwise toward nine o’clock, the knees bend and your hips drop as you execute a hammer fist strike to the opponent’s groin or abdomen.  3.) Immediately bring your right elbow straight upward striking the opponent under the chin as you straighten your legs slightly.

4.) Pivot on both feet clockwise toward twelve o’clock and strike the side of your opponent’s neck with the boney area of the inside of your forearm.  5.) Immediately execute a right punch as your feet shift position. Your right foot shuffles back and pivots counter-clockwise as the left foot moves forward toward the direction of the ten o’clock position.  Follow through with the punch by turning your hand over.  6.) Push off the left foot and step forward with the right foot (toes should be pointing toward the twelve o’clock position). Strike your opponent’s right shoulder with a left heel of palm strike and grab his clothing at the area struck. This strike should be hard enough to disrupt his posture and rock him back on his heels.

Note: The heel of palm strike targeting the pocket of the shoulder disrupts the opponent’s posture and rocks him back onto his heels. Notice the opponent is rocked back on the heel of his left foot and his lead foot is off the ground.

Note: The toes of both of your feet should be in line with the toes of his right foot. Your knees should be bent and your axis forward. Your belt line should be a few inches lower than your opponent’s beltline. Your opponent should be up on his toes, his balance broken forward.

9.) Straighten your legs and bend at the waist popping your hips up and lifting him into the air (this is an explosive movement). Keeping your grip on the opponent, bring your left elbow downward, twisting your upper body toward your left hip to finish the throw.

FOR MORE ON KAJUKENBO AND TECHNIQUES 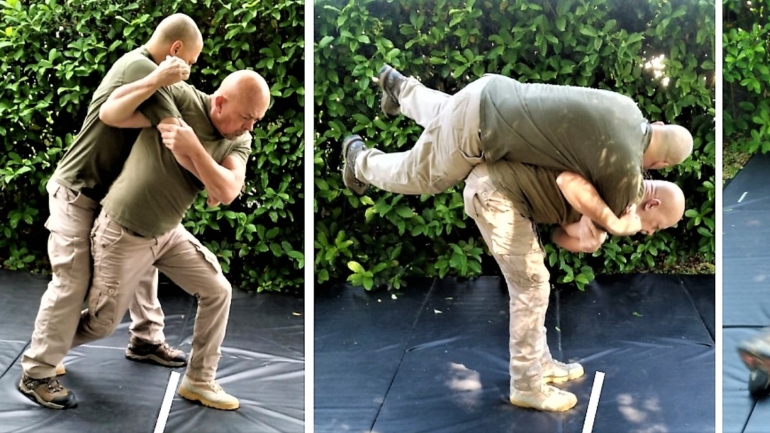 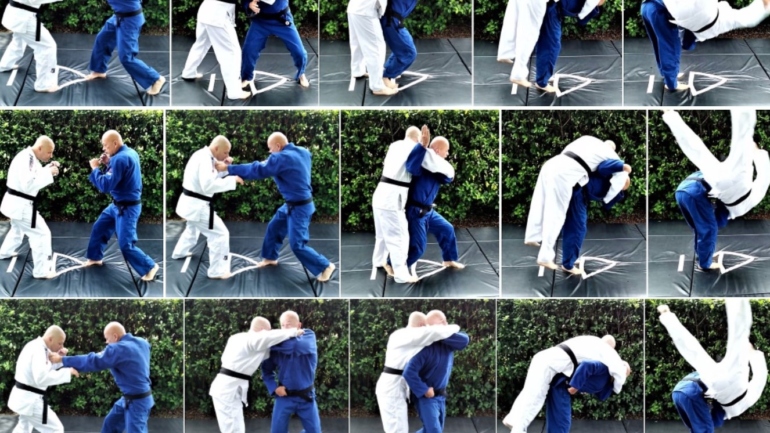 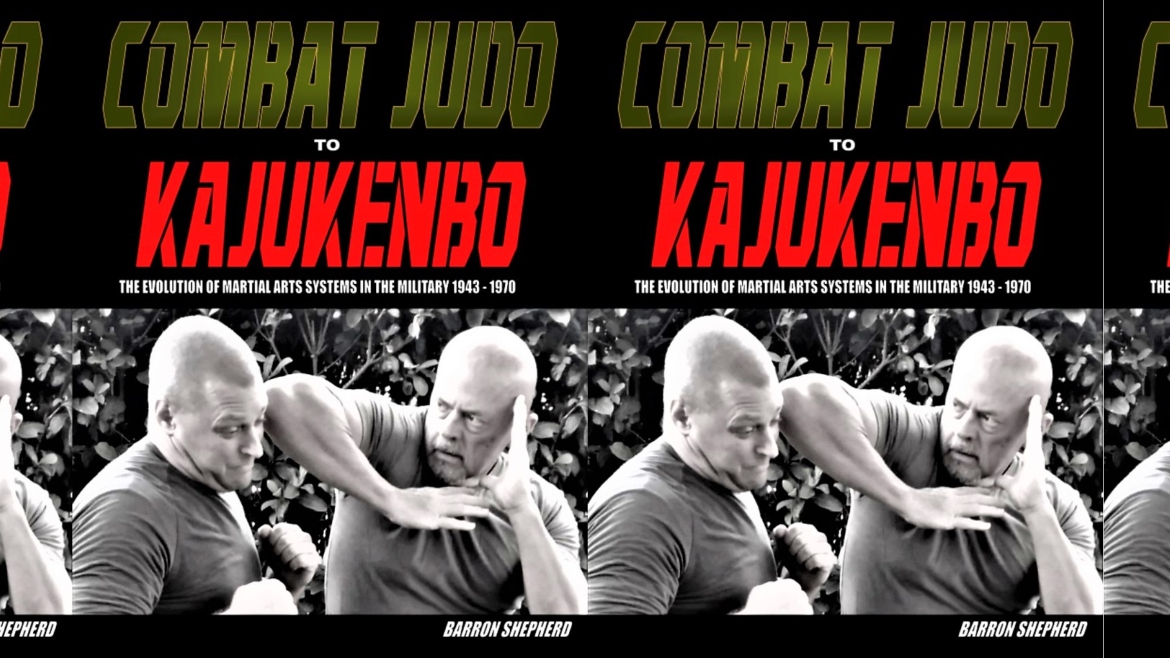 The Evolution of Martial Arts Systems in the Military 1943-1970

“COMBAT JUDO TO KAJUKENBO: The Evolution of Martial Arts Systems in the Military 1943-1970 is a great book. The detailed examination of the period manuals with Barron’s modern photographs and explanations is great. I can’t think of another such combination of history and practical H2H. An instant classic!” – Lance Gatling

“Barron Shepherd’s new book, “Combat Judo to Kajukenbo”, is a tough as nails book. Barron is a hardcore dude, he’s skilled and disciplined at what he does. You can see that with this book, everything is well thought out (instructional photos, layout, text) and I can’t think of a better person to teach the stuff.” – Bob Sabet

“Combat Judo to Kajukenbo is the latest book from Barron Shepherd. Barron’s in-depth martial arts training (4th Dan Judo, 7th Dan Kajukenbo and certified boxing trainer and coach, amongst others) shows in his ability to describe in simple terms the techniques in this book. While he takes the liberty of expanding and revising the curriculum of the Restricted Judo course, it is done in a logical and concise manner.” – Cris Andersen

FOR ORDERS IN THE U.S. CLICK ON DROP DOWN MENU AND BUY NOW BUTTON BELOW 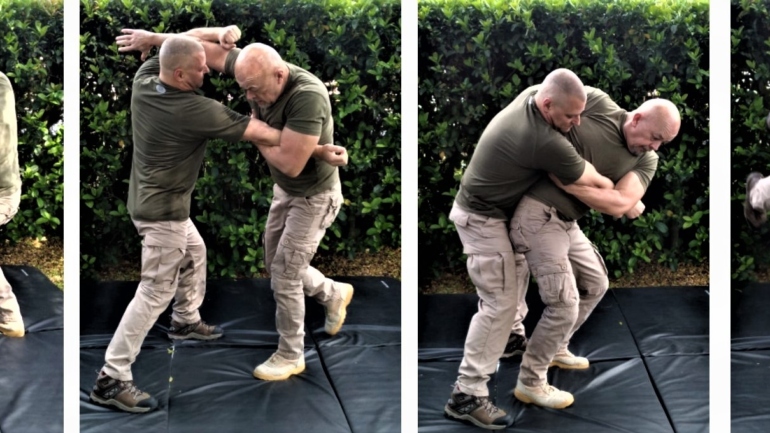 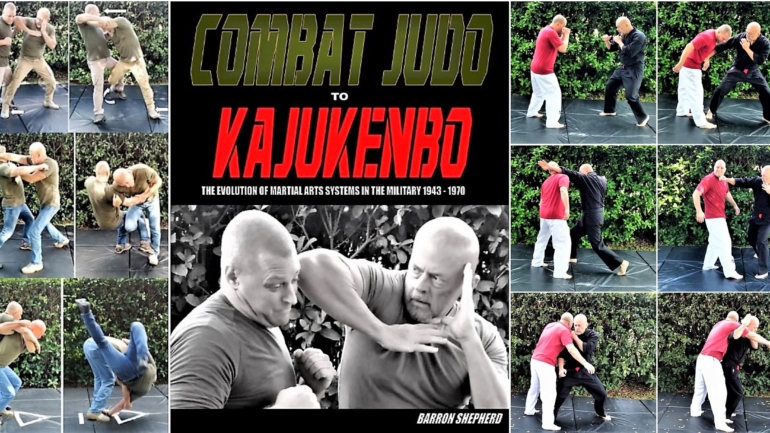