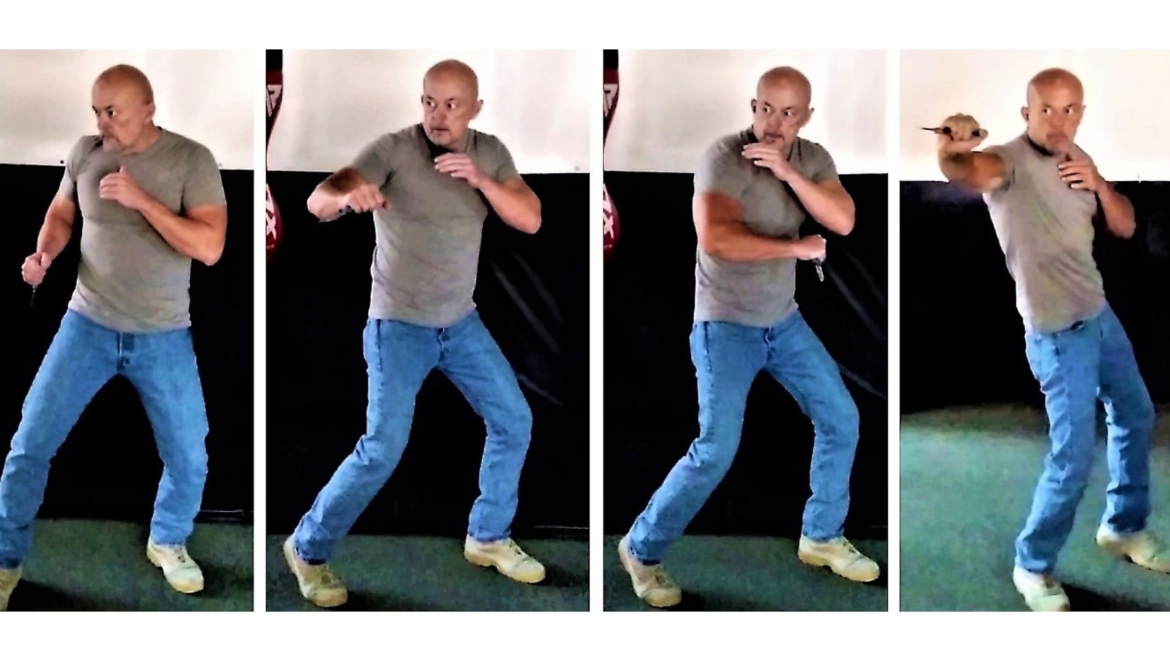 DEPLOYMENT
Blade deployment is probably the most neglected aspect of knife training. Deployment is defined as the time and distance it will take you to pull your knife out AND be ready for combat. You want to have the ability to effectively draw your knife under pressure of a violent encounter. If you cannot access your knife when you need it….. all the blade skills in the world won’t matter.

Blade Deployment Drills
In this section, the objective is to develop drills to draw your blade as quickly as possible and to do it safely. It makes tactical sense to not only develop a “quick draw” but to train tactics to give yourself the time and distance needed to draw your blade when under pressure.

The majority of knife attacks happen in “extreme close distance”. There is very little time to react. It makes sense to not only train to react quickly but also train to draw your blade in the spur of the moment. Train to create an opportunity to get your own blade out as quickly as possible.

The time it takes for you to draw your blade will depend on your skill level and the type of blade that you carry and where you carry it. For most of us the primary place to carry the knife is in or around the pockets of your pants. You should be able to easily access your knife whether you are standing, sitting, lying on the ground, or getting up from the ground.

My personal EDC is a tactical folder with the wave feature. The Emerson/Kershaw CQC-8K Modified Tanto Blade Knife. I also carry a Fox 597 Dart G10 Black Emerson Wave. These tactical folders have a hook feature on the back of the blade that catches on the pocket line of the pants and opens the blade as it is extracted out of the pocket.
These knives come with training replicas that have the wave feature as well. Regardless of the type of knife you have, drawing your blade should be practiced regularly.

The knife is placed toward the back of the pocket. Place the thumb on the inside of the knife between the knife handle and your pants. Your forefinger should be placed over the clip. Begin to pull the blade out slightly backward so the hook/wave feature catches on the rear side pocket line and opens the blade as it comes out of the pocket.
Reverse grip draw with the Emerson CQC-8K trainer folder. 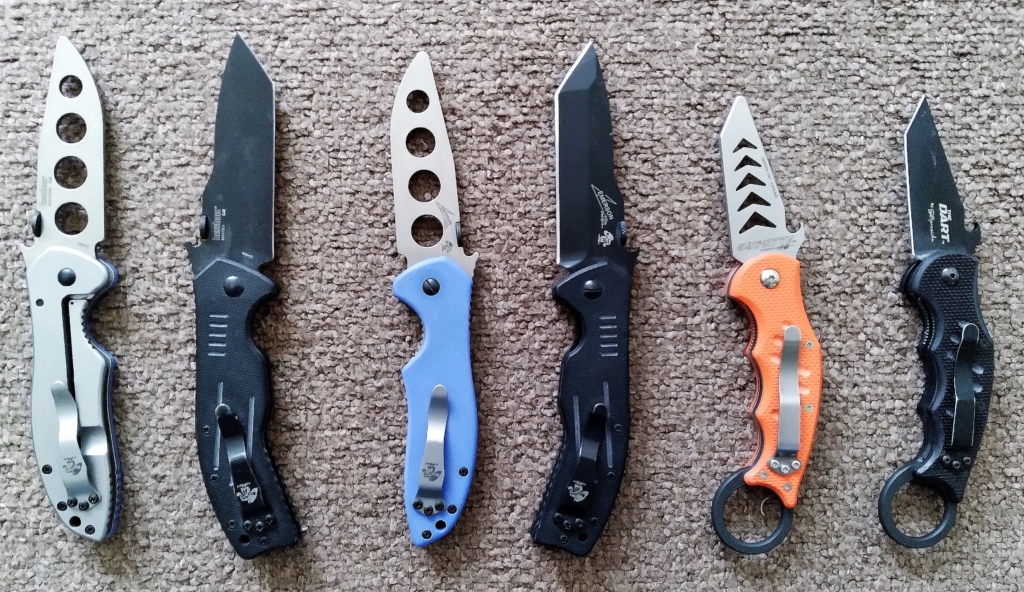 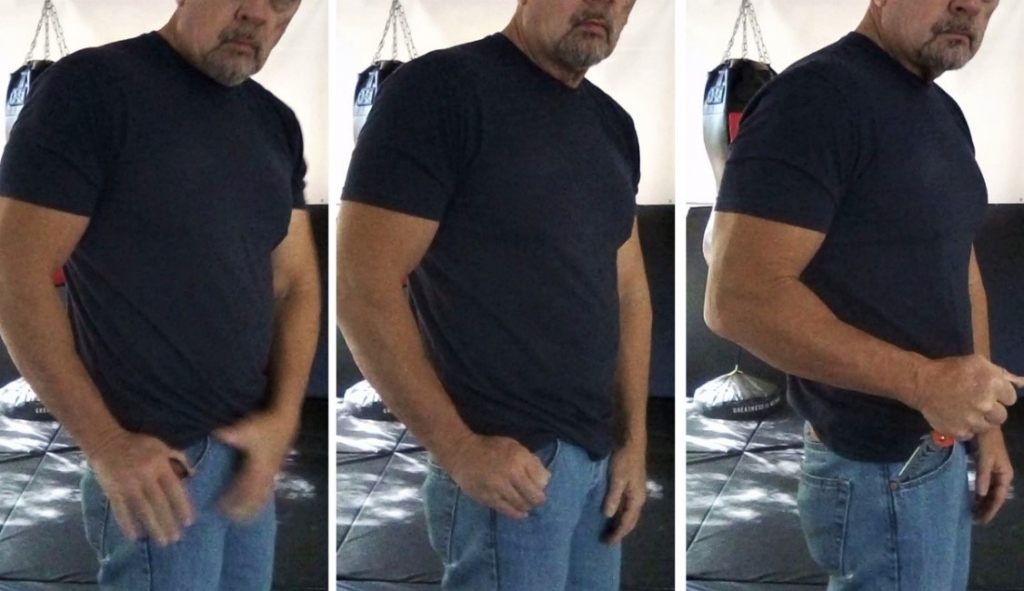 For the reverse grip draw the knife is clipped on the pocket so that the wave feature of the knife is toward the front. Place the thumb on the inside of the ring of the handle and your pants. Your forefinger should be placed over the ring. The ring of the Dart is between thumb and fore finger. Rotate the wave feature slightly out. Pull the blade out in a forward motion so the hook/wave feature catches on the front side pocket seamline and opens the blade as it comes out of the pocket.

IMPORTANT: To avoid potential injuries, practice your quick draws with training knives. Preferably a training replica of the exact blade that you carry.

Quick Draw and Cut in one Motion

Much like boxer’s develop a personal style with the same boxing techniques, you may find yourself drawing the blade in ways which are more comfortable to you. You should keep in mind the number of moves or motions it takes to draw the blade. The more it takes the less likely your draw will be successful. You also want a draw that will work with either foot forward.

I prefer a reverse grip draw for the simple reason that the direction of the draw is going forward toward my opponent. This allows me to immediately draw directly out and across as well as vertically or diagonally upward from either my carry side forward or in the rear.

Drill # 2 – Draw to cut
The horizontal cut is the same as throwing a lead hook punch in boxing. The right-hand draw should also be practiced with the left foot forward. The goal is to draw and cut in one motion. 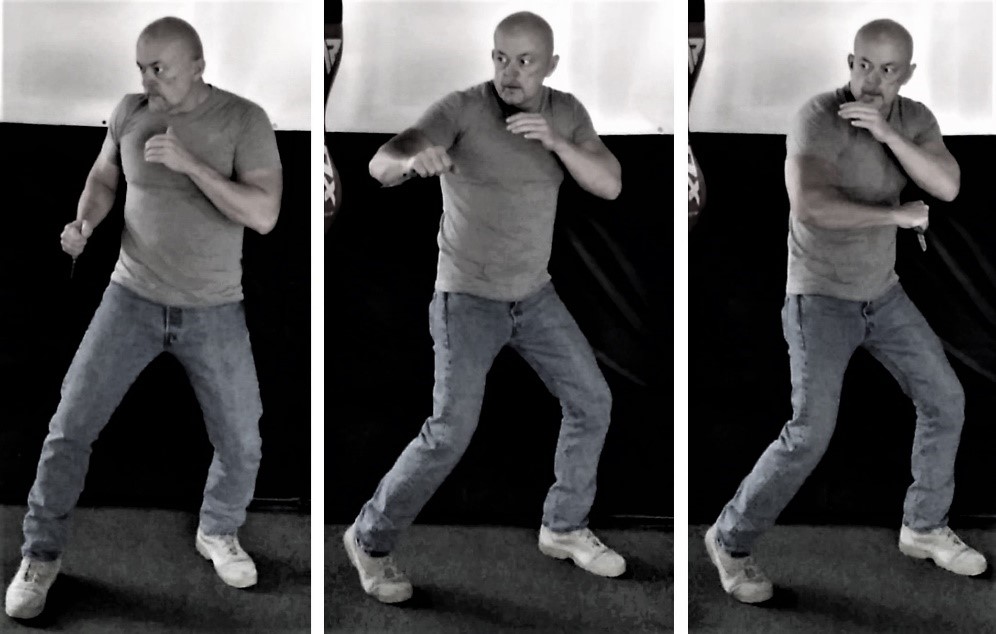 As you draw your blade, the right hand comes up as tuck your chin and bring the right shoulder up to protect your chin. Pivot counter – clockwise on the lead foot and execute a horizontal cut in the same way you throw a lead hook punch in boxing. You should end up in a cross-arm guard (3rd picture) ready to follow-up if needed. 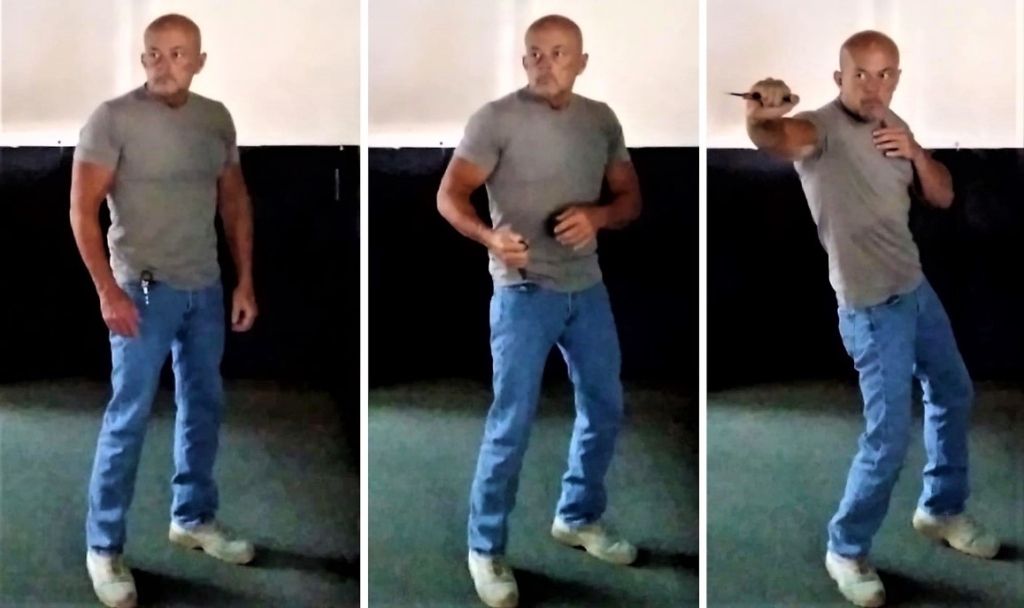 Draw the blade straight out from the hip and straight to the target as if throwing a loose flicking jab. Snap the hand back and into the fighting position.